Our concrete is being utilised as part the Victorian Government's $972 million Melbourne Park Redevelopment project.

We are supplying industry leading precast concrete technology, which can be installed quickly, in a variety of different shapes and sizes. Here you can see lift shafts, Hollow Core planks, and precast beams installed.

The redevelopment guarantees Melbourne will be the home of the Australian Open until 2036. We are thrilled to be involved in the transformation of this world class sport and entertainment precinct. 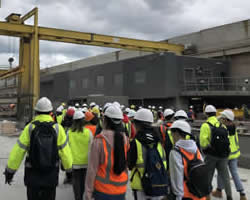 Students from University of Melbourne visit our site

Last week we welcomed around 100 students studying their Masters of Construction Management at the University of Melbourne.

The students were greeted by Managing Director, Peter Healy, and given a site tour by three of our engineers; James Whitfield, Vincent Liu and Allister Shaw.

As always, it was a pleasure for Hollow Core to meet some of the people that are the future of the industry. 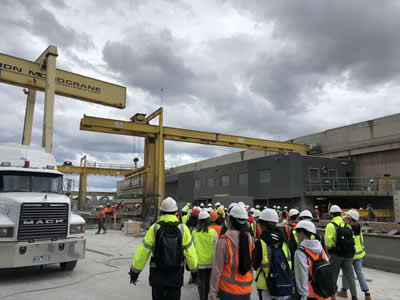 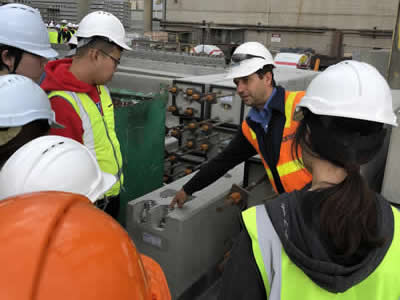 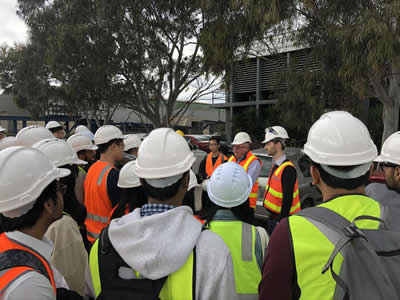 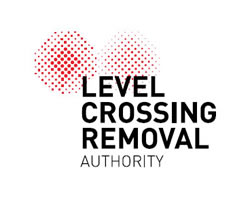 We're proud to be involved in a project that's keeping Victorian roads safer and speeding up our transport system.

The level crossing removals between Caulfield and Dandenong have utilised our Precast Concrete.

We congratulate the Level Crossing Removal Project on their 30th removal!! 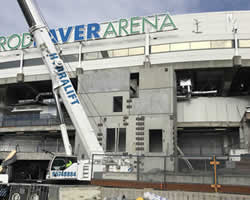 Despite many doubting the use of precast concrete for lift shafts, our team of engineers, designers and concreters proved their capability and made the impossible possible for the Rod Laver Arena redevelopment.

Using precast concrete for the lift shafts not only ensures stability and quality for the construction, it also provides the most efficient delivery model. We saved our client 10 weeks of construction time through quickly delivering our innovative precast solutions.

Check out these photos to see our pioneering precast solutions being delivered to and built at Rod Laver Arena. 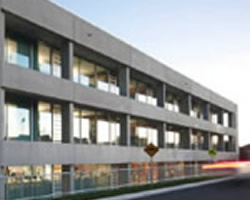 As Melbourne's largest retail water utility, Yarra Valley Water provides essential water and sanitation services to more than 1.8 million people. The utility company provides these facilities to approximately 30 per cent of Victoria's population, servicing an area stretching from the inner eastern and northern suburbs of Melbourne through to the Yarra Valley.

When embarking on an expansion of its headquarters in Mitcham, Melbourne, the focus was on minimising environmental impact while also ensuring expansive column-free internal spaces. To achieve this brief, sophisticated simulation tools and modelling were used. Precast concrete walls, floors, beams, columns, lift cores, and stair units became the favoured option and National Precast member, Hollow Core Concrete was contracted for the precast manufacture.

''The spans were greater than what would have been achievable using in-situ concrete flooring.''

TermoDeck® is an energy efficient heating, cooling, and ventilation system that uses the high thermal mass of structural hollow-core flooring slabs to manage the surface temperatures and flows of air within a space. Here, the temperature and energy retained in the building structure is actively controlled. By fan assisting air distribution, TermoDeck® is an effective way of maintaining comfortable and stable temperatures and ultimately results in lower overall energy consumption and reduced peak heating and cooling loads—all while maintaining comfort conditions.

Integrating mechanical systems into the fabric of the building not only helped to attain the thermal criteria, but it also provided an integral heating, ventilation, and air conditioning (HVAC) solution. Reducing the ductwork by half, the building's design allows the hollow-core slabs to simultaneously act as air-distribution paths and control the exposed ceiling surface temperatures.

In addition to acting as an air-distribution path for the mechanical systems, the exposed hollow-core concrete slabs also form part of the radiant temperature control mechanism for all spaces; it actively manages the cooling and heating loads. 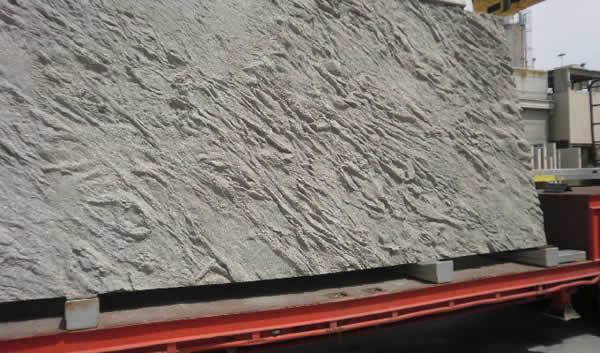 The exposed hollow-core flooring adopted a Class 2 finish to the underside of the planks, and according to Mr Healy, using this type of flooring resulted in a neat ceiling surface.

''Using hollow-core enabled electrical and data cabling to be concealed. It also helped with acoustics, allowing for the installation of acoustic attenuation to manage reverberation rates in the open-plan office layout,'' he detailed.

While Yarra valley Water originally targeted a 4-star NABERS Energy performance, the brief evolved into delivering an energy-efficient 5-star Green Star Office V3 outcome. Mr Healy says that the client is satisfied with the end result and that data is being collected to confirm the energy savings.

The project’s designer, GHD, predicts that the building should realise its designed energy consumption of 80.8kWH per square metre per year, along with carbon emissions of 58KG per square metre per year—a figure almost 61 per cent less than Australian best practice. When a full year's data has been collected, GHD will look at opportunities to further improve energy performance. 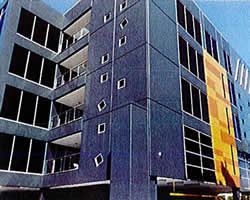 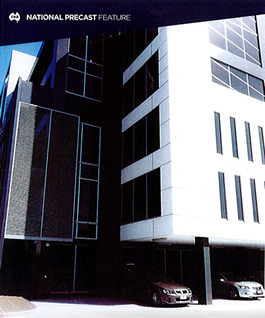 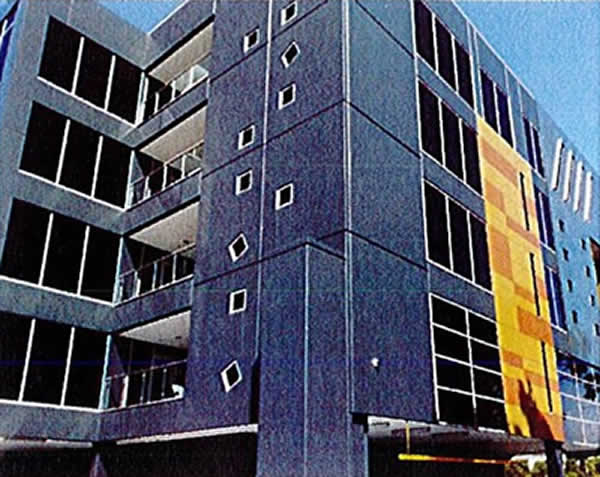 A striking multi-storey office tower in the Melbourne suburb of Mount Waverley highlights the versatility of precast concrete. This is a project where all aspects of precast were utilised from precast balconies, to stairs, structural walls, architectural walls, columns, pre-stressed beams, conventional beams, hollow core floor planks, lift shafts and stairs.

The building consists of four levels of hollow core flooring with architectural precast walls on the perimeter, as well as stairs and a lift shaft core at the centre..The entire site was excavated and an underground car park created with the use of precast columns, beams, balconies, stairs, landings and hollow core planks.

Local precaster and National Precast member Hollow Core Concrete was an integral part of the Forster Road project ,offering an holistic service. The company was responsible for design, manufacture and installation of the precast elements. The project was easily managed from Hollow Core's Laverton factory.

One of the more unusual features of the project's construction was the large underground car park.

''Getting to the site, we had to use extendable trucks, and that meant restrict ions on the time of day we could travel. Installing that length of span, we also needed a larger crane to be able to handle the load,'' Mr Djeri said.

ARCHITECTURAL WALL PANELS TO TOP IT OFF

The exterior walls of the Forster Road project have various patterns cast into the precast.
Squares, diamonds and rectangles in the panels, as well as a stacked effect,give the tower a unique and striking edge.

Precast was the obvious choice for the building. According to Mr Djeri, traditional construction using in situ concrete would have taken 12 to 18 months. The use of precast shaved about nine months from the project. ''Not only did we save the client time, but money as well. As soon as the precast walling and flooring was installed,other trades were able to begin fitting out. Trades like electricians and plumbers were able to complete their work straight away,'' Mr Djeri said.

''The other saving was with onsite labour. Because so much of the work is done offsite in a safe factory environment, fewer people are needed on site. As well, there's less risk that can otherwise be associated with being on a building site, like bad weather, the potential of industrial unrest and safety issues.''

The builder-developer of the office tower has been impressed with the flexibility and versatility of using precast and Hollow Core's Managing Director Peter Healy is also pleased with the result. ''Having one precast supplier made the scheduling and construction low stress for the client. Doing our job properly,makes the builder's job much easier'', he said. 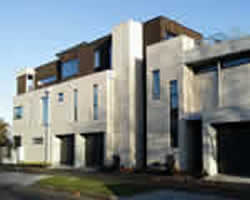 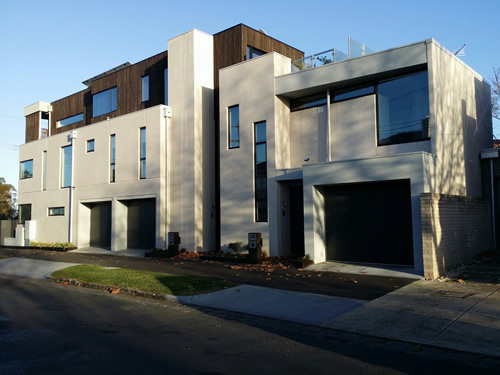 A big congratulations to Gaia Constructions the winners of the 2015 Excellence in housing award for ''Best Multi Unit Development'' - up to 3 units.

The three luxury townhouses were built by Gaia Construction, and designed, supplied and erected by Hollow Core Concrete. 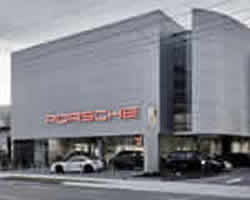 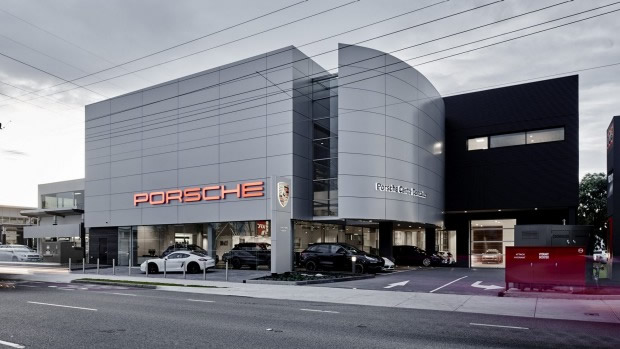 Car dealers love big display areas to show off their toys but architects faced a problem with the new Porsche dealership in Doncaster - the site area was only 1674 square metres.

Techne Architects, liaising with the builders, decided to build the parts for the showroom off-site, in a factory. This was particularly tricky, as the base material was concrete, which is notoriously heavy.

''Every part of the structural system was prefabricated,'' said Techne's project director, Nick Travers. It was a commercial first for the company. ''The driver was lack of access to the small site and the time frame. Being made in a factory - a controlled environment - takes away uncertainty.''

The total prefabricated structure included a suspended ground floor, three additional suspended levels, precast beams and hollow-core floor planks with clear spans up to 15 metres, three precast lift shafts - including two car lifts and a passenger lift - and mezzanine office space. ''We did not build a basement. The economics did not support that,'' Mr Travers said. Car parking was put on the roof.

The manufacturer was Hollow Core, based at Laverton in Melbourne's inner west. ''There was a lot of pre-prep work on site in the factory, liaising with Hollow Core to get it right. The job was being half designed as it was being built,'' Mr Travers said. ''The Hollow Core system enabled that process to happen.''

The company is named after the product - a lightweight precast concrete floor that can span up to 16.5 metres supported only at each end. It made the project viable.

Hollow tubular sections are created that run the full length of the 1.2-metre wide concrete planks.

This makes the planks 40 per cent lighter than if they were solid, easier to handle on site, and cheaper; less material is required, not just in the product itself but also in the supporting structures. Mr Travers likened the actual on-site build to a big concrete meccano set. ''With no back propping required, as with conventional concrete pours, other trades could immediately work in and around the structure. The building flew up in no time,'' he said.

''The stairs were one of the first things in, which allowed the workers on site to get cracking,'' said Techne's project architect, Dale McDougall.

Actual construction time was 26 working days compared with the six months a conventional structure would have taken.

The vertical design incorporated a ceiling height in the showroom and workshop of six metres - twice the normal office height. ''We wanted big volumes in the sale space and workshop, which has hoists and big clearances. The solution was to put in two car lifts and passenger lift,'' Mr Travers said. 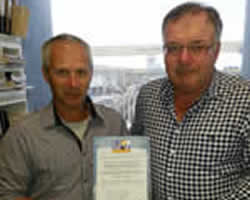 Hollow Core Concrete Pty. Ltd. achieved ISO 9001:2008 certification on 13th May 2013, in doing so we have confirmed a real commitment to product and service quality.

All of our employees understand the requirement for ongoing improvement which makes us leaders in our field. 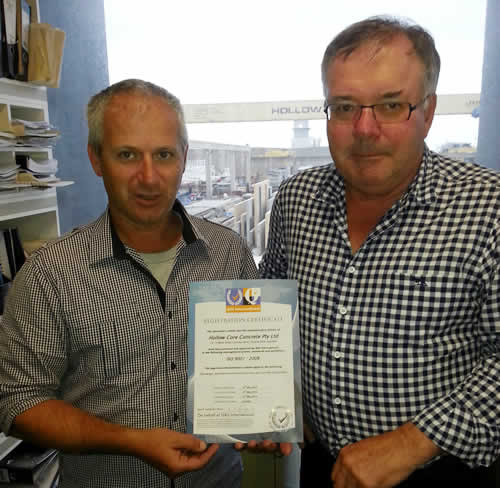 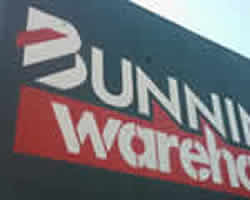 Bunnings Footscray has now been completed

The design required a 16.5Kpa floor loading, with the crane access being able to install precast wall panels from the suspended deck.

The floor finishes required that a crack free, level floor be achieved.

Need help with your next project?

Get in touch before you start.